How the ABM Works

I want to get through how the Arisblu Browser Manager (ABM) works, and later why it will include Edge as one of the "core" options. The application has the core browsers, which is a small list of browsers, and the alternative browsers, which there are many. There are a total of 40-ish browsers planned to be added, only five will be in the core group. That five includes: Dot (which is the default), Firefox, Chrome, Vivaldi, and Edge. All other browsers are put in an area known as "alternatives", which are set into their respective bases (Firefox, Chrome (which I know it is Chromium, but I hope the branding of Chrome helps newer users), and Other). All browsers will be available for Linux, but there is a possibility of adding support for other browsers through WINE through a "non-native" section.

There are five reasons Edge is one of the core browsers, familiarity, functionality, branding, intrigue, and most importantly visibility. Each one of these reasons almost even made Edge replace Chrome, if it weren't that Chrome is the most used browser on the market. These reasons do get complex and long (and for good reason) so each one is described separately:

Oddly enough, yes, Edge, to many people, gives a familiar experience. The UI is simple and clean, and the MSN updates being used by many people (myself included). 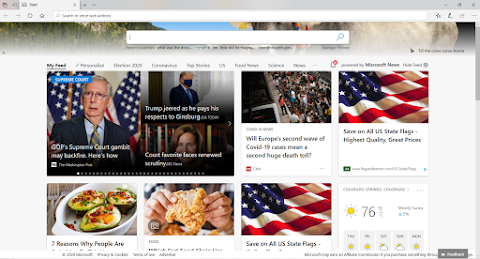 The UI is easy to navigate, with each button being well done. You might notice this is not new Edge, this is old Edge. The pre-Chromium Edge is a fantastic browser, which new Chromium Edge makes even better functionally. Now, here is a fresh install of the Chromium Edge: 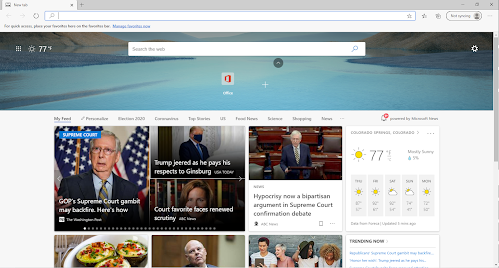 The browser looks fantastic, and better in many ways. While my favorite feature, the drawing icon, is missing, the browser overall still holds up to the level of Chrome, and a complaint I had previously (the developer tools) has been upgraded to a Chrome-level, which while not as good as Firefox, is still an improvement overall.

Collections, translation, immersive reader, read aloud, media casting, all being built in to the browser (and not specific apps or websites) are honest-godsends. Collections are like favorites except easier to manage, and cleaner to work with. Translations added not just on a whole website basis is actually life saving for me when a website mostly uses English but randomly the whole language changes for one or two paragraphs, making it difficult to understand. Read aloud is good for people like me who have difficulty reading, and media casting is just super nice. It's also cool that I am pretty sure it's not just for Chromecast. These functions make it easier for the user to work, and when using something like immersive reader, makes it so much easier to read the modern day news without adblocker and adblocker-blocker-blockers.

Edge is made by Microsoft, a company well known for being a competitor to Linux-based operating systems. It is a no-brainer to have a direct download in a core tool of the operating system. Here is why: an average user see's the word "Linux" and says "eh, must be difficult to use." If that same user saw that same Linux OS supporting a Microsoft product, they give interests. Supporting that product, AND another popular competitor (i.e. Chrome) being supported with EASY downloads with a tool built by the OS developer team, that's when people start saying "I will use this part time." While Arisblu already is planning to support tools to integrate a Windows 10 dual boot into the system to make stuff like gaming easier, this adds a ton of support when we can say "native support for x Microsoft product."

With visibility, we mean so much more than for Arisblu, more than with users, but potentially Microsoft themselves. While severely unlikely, there is a chance we could catch Microsoft's eye, and since they already work with Linux desktop company Canonical - who make Ubuntu - this might give us a big contact. While Microsoft does have issues, them supporting Linux is amazing, and we should not stop trying to work with them. With users, this part is far more likely, and possibly supportive. Since we decided to cut down ISO's as of posting the article mentioning the 216 ISO's we had to build per year down to 75 (for obvious reasons) we still have a lot of work to do. More eyes seeing the amount of work we do, and how many options we support WHILE STILL KEEPING THINGS EASY TO SELECT FOR THE USER, it could lead to new donations, word-of-mouth marketing, and more.