The Complex Way To Lazily Let Us Build ISO Files: 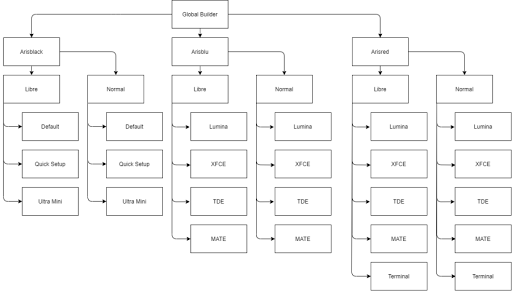 There are many ways distos make ISO's and other images, and often they have a set of build scripts with some small configurations, and whole ISO builder for each build. Us? No. We have what is called ArisGlobalBuilder and ArisInfiniBuilder. The image above depicts a simplified version of AGB (ArisGlobalBuilder). The AGB setup is designed for one main purpose: Build everything the same way.

How Does AGB work?
AGB functions with three main scripts: Arisblack, Arisblu, and Arisred. Each has their setups. While Arisblu and Arisred are well known and are the main focus, Arisblack is a new project with very little information shared. Arisblack will be an attempt to build a super micro system, going as far as having the most important commands and a very minimalist shell. The system will be set to standards, but have next-to-nothing in terms of software, options, and even slightly useless items. Arisblack has the general core utils, a generic shell, GNU Make (so you can actually install something), WGET (so you can pull from the internet) but will not have much else.
Back on AGB. AGB after Arisblack will then take the Arisblack ISO and use it as the base for all other editions, especially Arisred and Arisblu. These builders will take in the ISO's for each edition, and give it back to the AGB script. The AGB script will then make the directory in the root of the system called /usr/aig-VERNUM/agb-ARCH-VERNUM/*. This directory is fairly easy, it will have the ISO's for all the images. This is for each individual AGB, which for us there will be MANY. so how do we solve this issue?

What is AIB?
AIB or ArisInfiniBuilder is a lot more simple to explain. It simply takes the AGB scripts, and builds them to their respective directories. It also will handle documentation, software overview, and everything else. While AGB can run custom configuration files, AIB keeps them organized and similar. For mobile editions, there will be mobile configs, for desktop editions there will be configs for specific architectures. This hopefully will keep the complicated setups for each and every ISO minimal.