So we were wrong about Arisblu release dates... again.

The thing is, we aren't sure when a deadline is doable, and especially with almost one developer doing anything important, who recently had a mental breakdown, it is difficult. "But Kai, you have a team." Well... yes but actually no. We have team members but almost none of them work on the OS itself. We have FOUR core team members, Boomerang, Chloe, Trevor, and me. Trevor is part time, he mostly works with DotHQ (who is building what will become our default browser) and other Fivnex projects. Not everyone from Fivnex will even work on Arisblu. Raze is on the Discord as a Fivnex member (as he is) but not with the other developers. Not even all the other developers are members of Fivnex, like Boomerang. Now there is also Chloe whom is our hardware director. Their whole job is hardware. Okay, so what about Boomerang, the only other FULL team member? Well, their job is going to be Raspberry Pi support. They are also helping us with webapps for the system, so you can use a Discord webapp, not the browser. Okay, so what about our volunteers? Mr. Crisp works on application development, and Viriv is specifically a tester. That leaves this whole OS project to one 17-year-old named dumb-ass, also known as Kai. This makes it hard as now I have the job of ALL the ISO builds, which isn't fun... or easy. 30 ISOs for Arisblu alone is not easy, and we still want to make our Cherry desktop environment.

Why this is so difficult to fix?

Well first, who do I ask for help? In case you haven't noticed, I post a lot of help messages on Aris* twitter account. One of them got seen by 717 people, and 71 interacted (at the time of writing this). 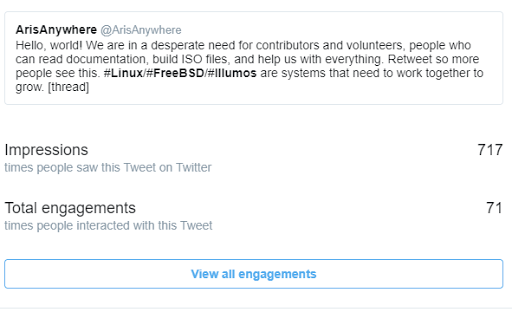 The last DM we got was from Viriv, when they joined as a volunteer on the first of this month. Before this Tweet was made. Okay... why not promote the tweet? We earn a good amount of money, except... I was a dumbass. See, the fact is we are in debt to Twitter of $100. That's... not great. We wont be able to promote anything until we are able to pay off said debt. Even then, I cannot accept new money until I have someone I can trust (who is at least 18 and with a bank account + paypal) can accept the money. We do have one MORE option, but it is a long shot. 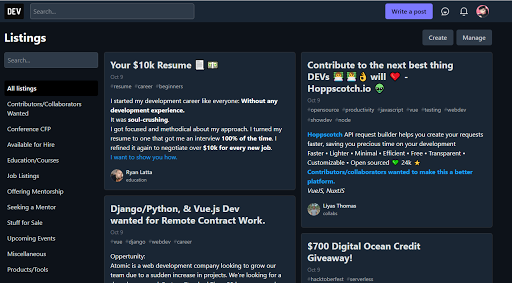 Dev.to/listings is good, and if you are like me and have several badges and write a good amount (sometimes) then you would be able to get 20 or more listings. Okay, so, why is this a "long shot." Well not only does this not always work, but we already tried it and it is kinda hard to get noticed. Not a bad deal, but something we want to use as a last ditch effort as this is more where you go to send off JS/TS/Python/Vue/Rust programming listings rather than Linux or BSD or Illumos stuff. Okay... what about asking the pros? Well, I will never do that again, mostly because I feel like the asshole in the room. I did it once on the OpenIndiana IRC channel, and I left before getting a response because I really felt like an asshole. The OpenIndiana didn't see my message for all I know, yet I felt kinda shitty. So... what is the solution?