Potabi is a FreeBSD-based mobile operating system that is designed to be an option for secure and encrypted phones, with no hacking needed, opt-in telemetry, out-of-box experience with future support for Android APK's, and a centralized app store for all applications. This article is going to what we WANT for Potabi, what the goal for Potabi is, what market we are looking at breaking into, and what the plan is.

Something we want to be clear about is where Potabi is going to hit in the market, what the core user-base is, what secondary user-bases we will support, and how we differ from other mobile operating systems.
Potabi is an enterprise-focused and privacy-focused operating system for mobile. While other Linux-based mobile operating systems focus on the end-user, the public, Potabi is more built for the people who need a work-phone that is secure and protected from attackers. The finalized version of Potabi was created after the whole SolarWinds incident. We initially wanted to use a Linux-based system as it would be easy, sensible, and it was the first thing we thought of. However, as an avid watcher of CGP Grey, I remembered something he said in his Plane Boarding Methods video, that made us rethink many things. This rule is simple and is easily described by the following screenshot.

Now, if this is difficult to read, or the image isn't loading, let me quickly describe it in text. Solutions that are the first thing that you think of, that look simple, and are easy to implement are often terrible and ineffective solutions that cause pain and suffering for all involved.
Now, the solution? FreeBSD for better security, better encryption tools, custom builders, and two editions. One 100% open-source and built for the end-user, the other being mostly open-source but with licenses for support, non-identifying telemetry, and the system being a little more locked down.
PUT DOWN THE TORCHES AND PITCHFORKS!! The second edition is the enterprise-focused edition. We are taking a RedHat-like approach with the enterprise edition, however, the main edition that anyone can use, modify, redistribute for free, will be the main download on the website is still just as open-source and free as FreeBSD itself is.

Before we go into features at all, let's make it clear one more time. Potabi is NOT going to release with everything we want immediately. Potabi is designed to start minimal and work its way up to be as close as what we want, as well as what the rest of the community wants. We cannot promise every single feature we want to add. Some are impractical, others unwanted, maybe we don't have a big enough team to maintain all of them, etc, etc, etc.
Just keep this in mind.
We can't currently say FOR SURE what proprietary software Potabi Enterprise will use, but some high-level contenders are Outlook, Gmail, Skype, Duo, and others, depending on whether or not we work closely with Microsoft, Google, or someone else (or even multiple providers) to give the best experience we can to the enterprise space.
The 100% open-source version, the one available to the public for public use (and the core edition) will also have some ups of its own compared to the enterprise version. First, the app-store will include games, built-in APK support, custom IRC and Matrix messengers (similar to Facebook Messanger on Android),

These are the promised features. Stuff we WILL include.
We, of course, will support a Matrix and IRC client. Eventually, we want to replace it with Pidgin and build the Facebook Messanger-like icons around that, but until Pidgin either uses Libhandy, or we have a big enough team to maintain a Libhandy (or whatever they renamed it for the GTK4 equivalent version if Pidgin gets to GTK4). The reason to use Pidgin is that:
ONE: We agree with the Instant Messaging Freedom Foundation.
TWO: We get MUCH more than just Matrix and IRC.
THREE: Pidgin has wonderful extension support (including for stuff like Discord).
FOUR: The code just overall looks better.
Until we get Pidgin to 100% work, we will just support a generic off-the-shelf solution like a web-app version of Freenode Webchat, and Element.io.
Lomiri and other desktops are other features we will consider mentioning here. While Lomiri will be the main desktop environment, we also have two other desktops to consider. One is a Windows Phone desktop clone, as the Windows Phone UI was a great mobile UI, and the other coming from Charlotte, our COO. The Windows Phone clone is pretty self-explanatory, but the one made by our COO is not. Our COO is working on a concept-desktop called Hazel, which while we cannot promise will complete development and make it into the OS, is something we are looking into supporting. Here are pictures of all three desktops. Lomiri, being a credit to Root.cz, Windows Phone credit to Wikipedia, and the Hazel concept from Charlotte herself. 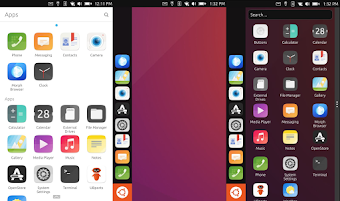 Finally, the feature I think is pretty cool, instant switching search. While many of you might be questioning "Wait, but I don't think Lomiri supports widgets!?" And while we aren't sure of the answer, the plan is to maintain our own fork of the desktop with the search bar itself being modified to also do searches on YOUR FAVORITE SEARCH ENGINE!!

Now, the search will only support Bing-based engines like DuckDuckGo, Ecosia, Alles (which will be the default), and also Startpage but that's it for now. We will make our April Fools version support SO MANY other search engines... owned by Ask.com. You will then have the choice of 40 (or maybe more) search engines, all using Ask.com's stuff, and owned by them. Why use Google when you can use ETour, FastQuickSearch, Top 10 Answers, and more!! In all seriousness, these will only be available on the April Fools versions of the software, and the ACTUAL search engine lists will be limited to the four mentioned. BUT WAIT!? What about Google!? Yahoo!? Etc!? Well, they will be added, but locked by default in the search settings where you will have to click one button to enable them. Why this solution? Well, we already know the million-plus complaints from Google-haters and people who think they are going to be spied on, where we thought "Hey, let's have these options, but the engines are disabled by default but easily enabled" to please both sides as best as possible."What if I want to use a custom search engine!?" Well, no problem. Like how any browser can allow you to set up a custom search engine, we will do the exact same. Where you can search ANY platform you want, as long as you understand how their searches work. The search engine defaulted into the search bar will also be set as the option on the Firefox app.
Now, there will be more features to come, but these are just the few we found most interesting to share, alongside talking about what our OS is going to be for.